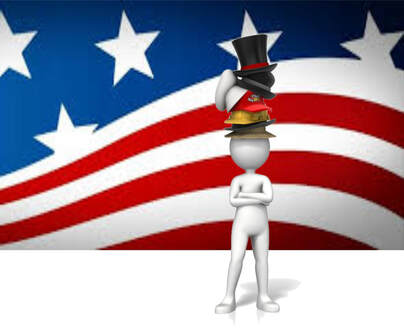 Here are some of my life experiences. These experiences broadened and informed my view of our world and our country.
• Participated in the Model United Nations representing Mauritania. It was a great honor to meet the Mauritanian Ambassador. He graciously accepted my invitation to speak to myself, my professor, and my fellow students.
• Interned at the office of Senator John McCain in Phoenix, Arizona. I worked in constituent services.
• Served as a Russian Linguist in the United States Air Force. I trained at the Defense Language Institute and later stationed in Hahn, Germany.
• Interned at Channel 10 News in Phoenix, Arizona. I later worked as a news writer for KFYI radio, and for Channel 3 News. I had the opportunity to meet John Anderson while working at KFYI. He was my first vote for the office of President of the United States. I have a long history of entertaining alternative candidates.
• Spent a summer as an exchange student in Guanajuato, Mexico. I studied the Spanish Language and the history of Mexico.
• Spoke with the Director of Budget Issues, Paul Posner, about the national debt and the future consequences of not doing something about it.
• Achieved the academic status of honor student at Scottsdale Community College. I completed classes in economics, political science, and critical thinking (logic). 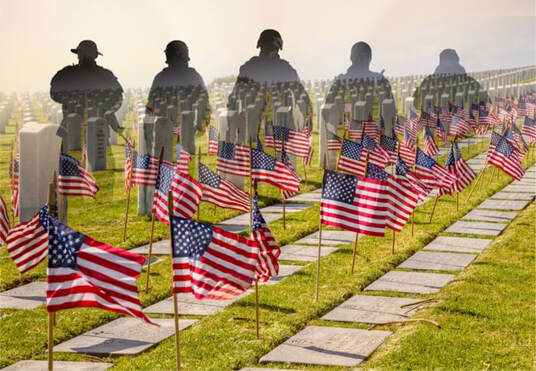 ​In Memoriam
As we gather with friends and family this Memorial Day, let us all take a moment to remember those who gave their lives to protect our nation and our freedoms. Let us also think of the parents who lost their child, the spouse who lost a partner, the children who lost a parent. What is left to us, is to protect and preserve the freedoms they so bravely fought for. It is our obligation to them and to the loved ones they left behind.

WHAT'S REALLY GOING ON AT OUR BORDERS?

There's a lot of opinions, advice, arguments, and anger concerning activity at the US borders. But before we decide what should be done, shouldn't we know what's going on? Please click the link below to read the media releases directly from U.S. Customs and Border Protection (CBP). After reading through several of the CBPs reports, you’ll have a better understanding of the complexity and necessity of a secure and regulated border. I support the efforts of the dedicated and brave officers who daily confront these daunting situations.
US CBP Media Releases

GIVE ME A WAVE! 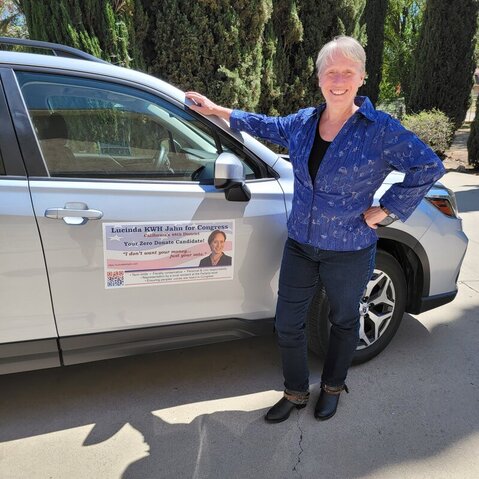 New signage for my vehicle. If you see me around town, wave! 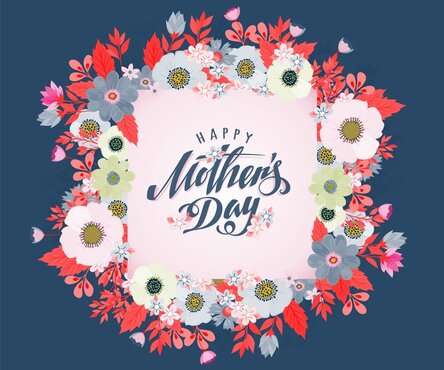 On this special day, I would like to celebrate all the mothers. Thank you for your dedication to raising the next generation of leaders, decision makers, and participants in our democracy. Motherhood is important and meaningful work. Enjoy your special day!

I'M ON THE BALLOT! 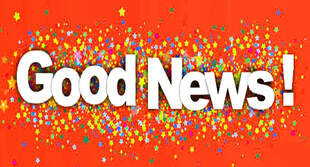 THE DAY OF THE "CITIZEN LEGISLATOR" IS OVER 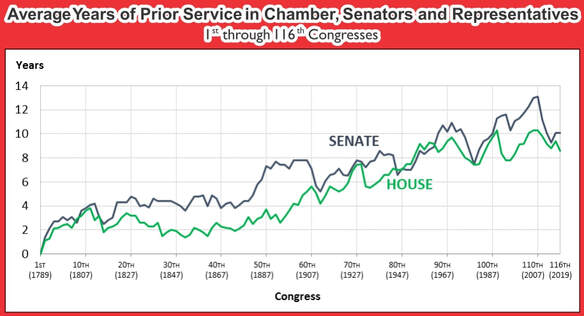 My topic today is term limits. We as a nation risk a de facto oligarchy if we continue to allow people to stay in office for over 30 years. The longest serving senator was Senator Robert C. Byrd (D-WV). He served from Jan 3, 1959-Jun 28, 2010, that's over 51 years. The longest serving congressman was Congressman John David Dingell (D-MI), who served for over 59 years. Congressman Dingell's biography says he was first elected to the 84th Congress by special election (1955) to fill the vacancy left by the death of his father. Terms of this length are careers in politics, not public service. The trend cited on page 6 of the "Congressional Careers: Service Tenure and
Patterns of Member Service, 1789-2019 (Updated January 3, 2019)", Figure 1, shows an increase in the average time of prior service in chambers for both the House and Senate. The complete report can be found at, https://fas.org/sgp/crs/misc/R41545.pdf. The examples above could certainly be considered outliers most definitely, however I am more concerned about the trend cited in the study done by the Congressional Research Service. According to the report, the day of the "citizen legislator" is over. The legislators had full time non-political employment and served part-time over a short number of years. The challenges our country faces today are much more complex than before, one may assume greater longevity in office would be helpful, however, we risk encouraging corruption. We also risk locking out "citizens" from all walks of life who offer alternative solutions, innovative ideas, and diverse skill sets.

Click here for info on the Longest Serving Representatives

Click here for Membership of the 115th Congress: A Profile 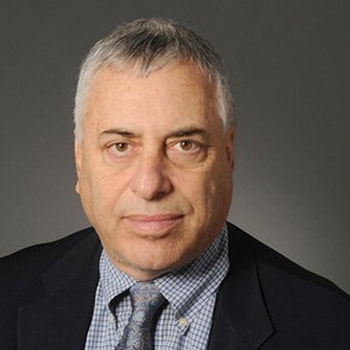 Today I am going to share a personal story with you. I had the rare opportunity to speak with the then Director of Budget Issues of the Government Accounting Office, Paul Posner in 1997. I was doing an assignment for a TV Broadcasting class. Paul spoke with me for over an hour about the state of the national checkbook. I asked him at one point if the press ever talked to him, he told me they show up, ask a few questions, then say they don't know how to explain the issue in 60 seconds and leave. Granted, it is not a subject to be handled in a 60 second soundbite. He asked me if I had children. I said yes. He asked me if I wanted them to be able to afford to leave home before they were 40 years old. He told me my children could be facing an 84% tax rate if we continued on the fiscal path we were on. I see news stories about how adult children are staying home or returning home in their 30's. I asked him about Social Security, he confirmed my suspicion it was a socialistic mechanism for taking money from young people and giving it to old people. Word on the hill was, it was another case of FDR pulling the wool over congress' eyes. We are leaving our children an enormous debt and a monetary system based on debt. There is no painless way out of this mess. We will need leadership that has the courage to tell us the truth about our resources and our fiscal situation. Sadly, Paul is no longer with us. I however am still trying to keep the light on.

IMMIGRATION... MORE COMPLICATED THAN YOU THINK 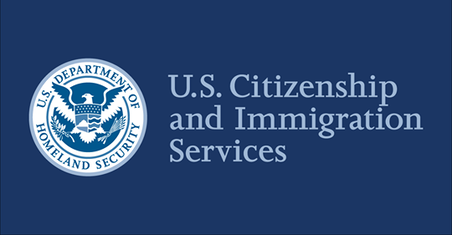 Immigration is a very important issue for the 50th Congressional District of California. Our proximity to the border makes it essential we understand how and why the situation is what it is at our border. The issue is complicated and more layered than the public dialogue would suggest. The United States is spending money through USAID to help the governments of Honduras, El Salvador, and Guatemala address the causes of the northward migration. The USAID is reporting some positive progress towards addressing the violence in the three countries mentioned above. The DHS website offers some rather detailed data sets about border apprehensions and numbers of individuals granted legal status. The USCIS website offers a readable and succinct history of immigration policy in this country. We have endeavored to keep up with the ever-changing circumstances of peoples across the globe. We cannot do this alone. It is not reasonable to think we can relocate billions of people onto the land mass of the United States and think all the social problems suffered by humanity will be solved. I do have my concerns about trying to solve the issues with money alone. We need to be aware of the behaviors we are encouraging with the dollars we spend, and it is not unreasonable for the American taxpayer to expect tangible results within a time-frame. Why stop undesirable behaviors if you are getting paid to do them? I know it may sound cruel to some, but a little tough love is not out of line if our goal is to help people learn how to be better stewards of all aspects of their lives, including their human capital, natural resources, and effective and humane governance. Addressing the issue is a process requiring new immigration legislation and clear, understandable communication of the law, not just domestically, but internationally. The issue is not only humanitarian, but involves our legal system, our federal enforcement agencies, and our judicial system. We have an obligation to take care of ourselves as well. A friend once offered me some good advice. He told me to take care of myself, because if I didn’t, I would not have the resources to help those I cared about the most, when they needed it most. We cannot exhaust our own resources supporting corruption, violent behavior and poor stewardship of resources.

WHY IS RUNNING FOR OFFICE BIG BUSINESS? 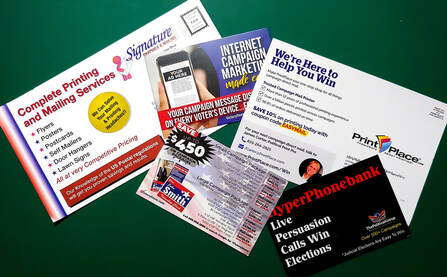 Sometimes, no matter how serious the endeavor, it is best to maintain a sense of humor about it. It keeps you grounded. I thought I would share some mailers I've received since starting my campaign. Apparently, running for office is a business. Note that "*Judicial Elections Are Easy To Win." The VictoryStore.com says I can achieve the same reach as a presidential candidate for far less money! I can talk to a sales representative to set up my digital yard signs, FOR PENNIES! I love the Small Campaign and the Large Campaign package prices, you get the biggest savings on the Full color option. The parties and the media go on, and on about how big corporate money is a threat to our democracy. These flyers suggest to me, we have made running for office a big corporate enterprise.

​THERE ARE MORE OF US THAN YOU THINK 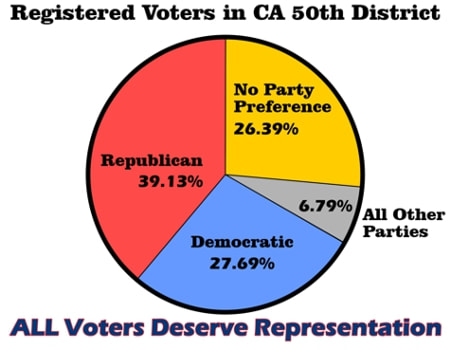 No Party Preference voters make up 26.39% of California's 50th Congressional District according to the California Secretary of State, Report of Registration as of October 1, 2019, Registration by US Congressional District. Make your voices heard and vote in the March 3, 2020 Primary. I am fully aware of the belief a vote for a non partisan candidate is a spoiler vote, however, that fear keeps us captive to a two party system. The No Party Preference demographic is growing and now is the time to break the bonds of partisanship and make our voices heard.
Click here for Report of Registration as of October 1, 2019

HEALTH COVERAGE IS NOT HEALTH CARE 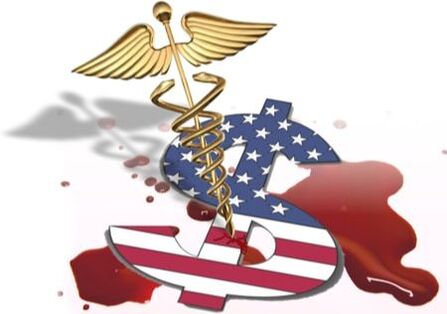 Health Care continues to be a major issue for households. My view is the Affordable Care Act needs to be repealed. First of all, we are not discussing how to deliver quality care, we are arguing over who is going to pay for it and who isn't. An insurance policy is a contract, in exchange for a premium paid, health care will be paid for under the conditions outlined in the policy. I've asked to review a policy multiple times through the years, before purchasing, and am told it is only available for my review after they take my check. It's as simple as this, I should be able to review a legal contract BEFORE I sign it and have access to ALL of the terms of the agreement. I think we need to hold the entire insurance industry accountable to the end consumer, you and I. I would favor legislation that gives us meaningful choices and a blend of public and private care. Stay healthy and stay strong! 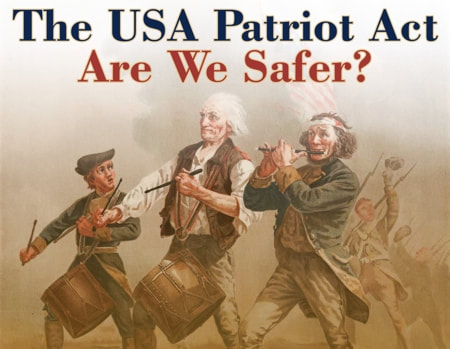 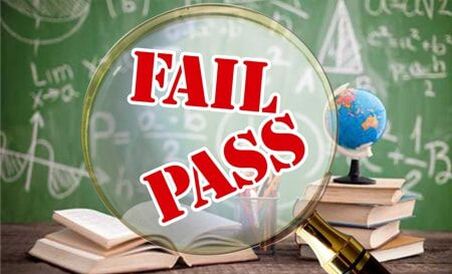 Today's topic is K-12 Education. I personally have not voted in favor of tax increases for education in decades. It seems to be a vicious cycle of under performance, followed by, "if we just had a little more money, we could improve the quality of education." The entire system needs an overhaul. Money is not the answer, our teaching methods need to be re-evaluated. We need to reassess how resources are distributed. My impression is that more resources go to administration and facilities than in teachers' paychecks, the people who spend the most time with our children than any others in the system. We need to invest more into the facility of the mind than the "facilities."
Click here for info on the Federal Department of Education... I suggest taking a look at the Data Tab
follow me on social media