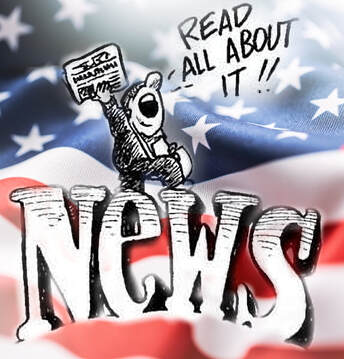 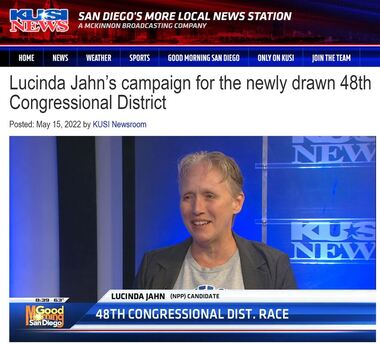 I was interviewed on San Diego Local News KUSI on Sunday at 8:40 AM. Click on the link below to watch my interview.
Lucinda's Interview with KUSI

May 9th 2022
How would you balance the region’s need for more housing, especially for people at risk of homelessness, with concerns that more homes will only make wildfires worse?

“You have building codes that have to be addressed, you have to take into account the environment that you’re building the homes in. There’s only so much the local environment can actually take.
“There’s a lot of information the federal government has, of what works here and there, I don’t know that they’re very good at sharing it. Those resources (should be) more available.
“As far as solving that issue, that’s not as much a federal one as I would say it’s a local one, because the feds don’t make your local building codes, and those codes have to be specific to the area.”

The drought that we’re in and the war in Ukraine have highlighted how reliant the region is on imported resources like water and oil. How can the region become more resource independent?

“We need to broaden our scope, being more self-sufficient in terms of manufacturing.
“There are abuses that we know go on in the manufacturing sector of other countries. We want clean water and clean air, but we’re ok with them polluting the water and air somewhere else if it was cheap. So we’re gonna have to start reinvesting.
“We’re gonna have to look at treatment plants, I know there are cities in California treating sewage water. We’re gonna have to do some water management on ground water.
“Oil? I’ve looked at hydrogen fuel cells, we have that technology. We have electric, and we have to look at how that electricity’s being produced, not all of it’s being produced cleanly. We do have oil resources.
“If we have a more diversified energy production system, we can start dialing back how much of that we need to use. It’s gonna take investment.”

What will you do to ensure you’re not corrupted by opportunities to profit from this position?

“I am the ‘zero donate candidate.’ I am not for sale. I have literally accepted no donations. I work for a living, that’s why I’m talking to you at 4:45.”

May 9th 2022
48th Congressional District
One candidate, Lucinda Jahn, an entertainment industry technician, has registered as a candidate without a party. Jahn said she also favors term limits, as well as simplifying the federal tax code and repealing the Affordable Care Act for a new blend of private and public healthcare.

April​ 18th 2022
San Diego Union Tribune:  What will be your top domestic and international priority in Congress?

Term Limits. We risk a de facto oligarchy when allowing politicians to stay in office for over 30 years. The longest serving congressman served over 59 years. There’s an increase in the average time of service for the House and Senate. Greater longevity in office risks encouraging corruption and blocking people from all walks of life who offer alternative solutions, innovative ideas, and diverse skill sets.

Our federal tax code is thousands of pages long.  We must simplify the tax code.

Create a blended health care system. The Affordable Care Act needs to be repealed. We’re not discussing how to deliver quality care; we’re arguing over who’s paying for it. An insurance policy is a contract, in exchange for a premium paid, health care is paid under the conditions outlined in the policy. I've asked to review a policy multiple times before purchasing and am told it is only available for my review after I've paid. It's as simple as this, people should have the right to review an insurance contract BEFORE signing it. We must hold the insurance industry accountable. I’ll support legislation that gives us meaningful choices and a blend of public and private care. Stay healthy and stay strong!
​
My international priority is finding a path to end the war in the Ukraine.  We cannot be seen as backing down from the commitments we made to our NATO allies and to the Ukrainian people.

San Diego Union Tribune:  What more can Congress do to combat climate change?

Lucinda:  Congress should fund research and development of several energy producing systems such as, solar, wind, geothermal, and thorium nuclear reactors.  Congress could also support research into carbon capture systems.  We need more regional solutions and more diverse solutions.  It is not a problem that can be fixed with a focus on only one system or method of energy production.

San Diego Union Tribune:  How do you assess the Biden administration’s response to the Russian invasion of Ukraine? What would you have done differently?

Lucinda:  The Biden administration’s response to the Russian invasion of Ukraine looks a lot like the previous response under President Obama, timid and uncertain.  Sending 3,000 troops to NATO countries when the Russians had 150,000 troops staged outside Ukraine ready to go does not look like we are serious about responding to Vladimir Putin, should his army continue into NATO territories.  More troops and resources should have been moved into NATO countries when we became aware of the numbers of Russian troops staged at the Ukrainian border.

San Diego Union Tribune:  U.S. immigration policy is complex. What two areas would you focus on to make changes to it?

Lucinda:  I would focus first on our immigration laws. It appears we have not seriously reviewed this legislation since 1986. The second area I would focus on is enforcement. We must define the term “asylum.”  We need to not only define it, but we also need to clearly communicate what exactly it means to the global community. We must improve enforcement and processing.

San Diego Union Tribune:  How should the United States handle the growing number of refugees and asylum seekers from Ukraine, Afghanistan, Central and South America and elsewhere?

Lucinda:  ​Unfortunately, we need to process them according to our current laws and through our current system for processing immigrants and refugees. We cannot take in everyone, sorry, but it is true.  Some communities can be better served by assisting them in finding local solutions to help the people of these countries create a home of prosperity, rather than a place to flee.

San Diego Union Tribune:  How would you try to improve border wait times for personal and commercial crossers at the U.S.-Mexico border?

Lucinda:  I honestly do not have enough information to determine why the wait times are so long.  A detailed review of border operations is needed.  I will review US Border Patrol policy and staffing and personally visit the border see for myself the tragic situation and speak with border patrol staff to make an informed judgement and propose a decisive process on how to improve wait times.

San Diego Union Tribune:  What specific steps does the nation need to take immediately and over time to ensure it’s better prepared to handle the next pandemic?

Lucinda:  We already have several agencies working in this area.  What we do not have is a system for providing actual care.   The Federal agencies working on monitoring and responding to pandemics need to work more closely with state and local health care agencies to develop response plans for the inevitable reoccurrence of a pandemic.  We also need to create mobile hospital units that can be deployed across the country to alleviate the pressures placed upon our medical workers, supplies and facilities.

San Diego Union Tribune:  What role, if any, should the government play in helping American workers obtain health insurance? If you support a government-related insurance plan, how would you finance it?

Lucinda:  None, I do not think it is the role of government to sell health insurance. My view is the Affordable Care Act needs to be repealed. We really need to move towards a blended system of health care. We must implement a public health care system, while maintaining the private insurance and private medical sectors of our society. Large companies that choose to offer health insurance as a benefit of employment could still do so, while small private businesses, self-employed and unemployed would have the safety net of public healthcare. Loss of employment should never put your health at risk.

San Diego Union Tribune:  How would you use your federal position to advance local issues, such as housing, homelessness, and veterans affairs?

Lucinda:  The role of a member of congress is not only to advocate for legislation, but to also inform their constituency, ALL the people they represent. The founders of this nation organized a sort of “living lab” for solving societal problems.  I would use access to the vast informational resources of the Federal government to create a better system for helping state and local governments share information on their programs designed to address these problems. We can help each other determine the root causes of our various social problems and support each other in finding solutions.

Lucinda:  I had the rare opportunity to speak with the Director of Budget Issues of the Government Accounting Office, Paul Posner in 1997.  Paul spoke with me for over an hour about the state of the national checkbook.  He asked me if I had children. I said yes. He asked me if I wanted them to be able to afford to leave home before they were 40 years old. He told me my children could be facing an 84% tax rate if we continued the fiscal path we were on. I see news stories about how adult children are staying home or returning home in their 30's. I asked him about Social Security, he confirmed my suspicion it was a redistribution mechanism for taking money from young working people and giving it to our seniors. We are leaving our children an enormous debt.  There is no painless way out of this mess. We will need leadership with the courage to tell us the truth about our resources and our fiscal situation.  We MUST simplify the tax code to reduce the tax burden on families, revisit Social Security to ensure its viability, and have the discipline to live within our means.  Also, restructuring of the enormous Federal bureaucracy is necessary to cut costs and function efficiently.

San Diego Union Tribune:  How worried are you about how polarized the U.S. has become? Do you think our democracy is at risk?

Lucinda:  I do worry.  The polarization has made the fine art of constructive communication and compromise disappear.  The rhetoric is not helpful for better understanding between diverse communities.  I do believe our democracy is at risk, as well as our society’s ability to function as the forum for meaningful discussion and civil discourse.

San Diego Union Tribune:  When have you shown independence from your political party on a significant issue?

Lucinda:  Every day! I do not belong to a political party. My philosophy is, as your representative, I should NOT be beholden to a political party, antiquated ideals, a religious theology, or financial donors. This is why I am a No Party Preference candidate and the Zero Donate candidate. The first, best and last role of your representative is to represent ALL THE PEOPLE of their district.
follow me on social media