why the "zero donate candidate" ?

As the “Zero Donate Candidate,” I am not for sale! I'm not asking for your money, just your vote.  I'm a No Party Preference (NPP) candidate because big money and party politics are compromising our republic.  It's time the electorate exercises their right to vote and choose new leadership.
I WILL NOT be beholden to donors, corporations, party affiliations, special interest or religious organizations.
​If elected, I WILL ONLY be beholden to the people I represent, the residents of the 48th Congressional District of California.
I believe in:
•  Term limits
•  Being fiscally conservative
•  Personal and civic responsibility
•  Representation by a local resident at the Federal level
•  Ensuring peoples' voices are heard in Congress
DO NOT DONATE!
-click here- 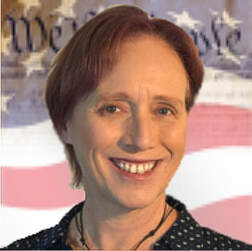 ​I was born in Oceanside, CA, but raised in Indiana. I started working at 16 to help keep the lights on at home. I delivered newspapers 7 days a week and worked in a restaurant while attending Bloomington High School South.  After high school, I moved with my family to Arizona.  I later enlisted in the United States Air Force and served as a Russian Linguist.  I married James Clifton Heatly Jr at 24 and sadly, seven months later was a widow.  I returned to Arizona, where I met my current husband, Randall R Jahn.  We’ve been married for over 30 years.
We have two beautiful daughters, Cassandra and Lauren.  Our family moved to California in 2006.
​We currently live in beautiful Ramona, CA.  I’ve been a full- time mom, a part time theater technician, and a business owner.
follow me on social media